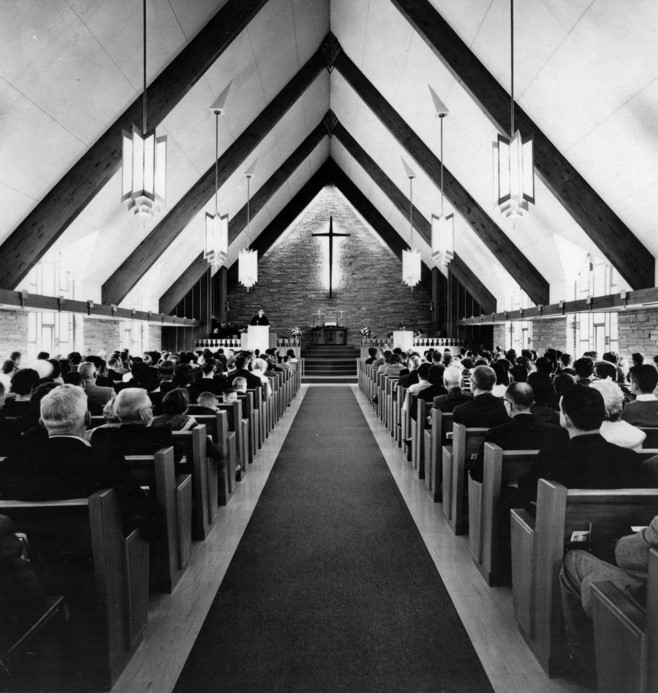 On September 12, 1952, six couples met at 3201 Amidon to discuss the formation of a new church in Northwest Wichita. Nine days later, on September 21, the first service of Pleasant Valley Methodist Church was held in the home of Mr. & Mrs. Herman Mueller at 2801 Porter. Church school for the children was held across the street at the Coulson residence.

Pleasant Valley’s first minister, the late Rev. W. E. Callahan, began regular services in the remodeled garage of Emmett Hall at 2824 N. Clarence. Church school was held there and in other neighborhood homes. In March 1953, a groundbreaking was held for the first building. During construction, church services were held in the Pleasant Valley Elementary School auditorium. On May 2, 1954, the official cornerstone was laid, and in October of that year, the Rev. George Wattenbarger became the pastor.

In September 1992, Pleasant Valley celebrated its 40th anniversary. Several generations of families continue to worship at PVUMC.  We are proud of our heritage and our charter members.  As the years pass “our prayer continues to be that we shall grow spiritually, that we shall be concerned about others, and that we shall be a Church in Mission.” (From the 1977 and 1983 church history booklets.)